As it is our culture to enlighten everyone on various aspects such as fashion, science and so on, today’s topic would be some facts about the continents that exist in the world today. Most do not even know that there are seven continents present in today’s world. Well, all good. Below are some facts even I did not know about our continents. Enjoy

The seven continents are the seven main land areas on the Earth. Some are joined to each other, and some are completely surrounded by water. Some continents have a lot of countries, but others have only a few.

Interestingly the names of all the continents end with the same letter with which they start except North America and South America.

It is believed that in past, all continents were joined, this land area was called Pangaea. This area started to break up & got divided into 7 parts. Hence, today we have 7 continents. These continents are still moving away or moving close to each other. This is called continental drift or plate tectonics theory. For example, Europe & North America are said to be moving 7 cm apart every year.

It is the largest continent. It covers one-third of earth’s surface.

Also it is the biggest in terms of population in the world. Half of the world’s population lives here. World’s two most populous countries, China & India are in this continent.

It is the birth place of great religions – Hinduism, Islam, Buddhism, Christianity.

It is also the place of great ancient civilizations- Chinese, Harrapan.

According to one estimate, 9 of 11 Global Growth Generators countries came from Asia driven by population and income growth.

It is the second largest continent.

It is also called Dark Continent as for long time not much was known about this continent due to its difficult inhabitable terrain.

It is the home of the Nile, the longest river in the world.

It is also the home of the Sahara, the largest desert in the world.

In the Sahara Desert, the Tree of Tenere was the only tree around for 250 miles, until in 1973, a truck driver crashed into it and uprooted it.

Africa is said to be the place where 1st humans lived.

66% of world’s chocolate comes from Africa.

Africa is considered to be the place where the first human lived and learned to use tools.

Australia is the largest island (island is a place which is surrounded by water from all sides). It is also the smallest continent in the world. It is also known as “island continent”.

Australia continent has only one country which is Australia itself. It lies entirely south of the equator and is called land down under.

The name Australia comes from the Latin word australis which means Southern, it seems it was named as Southern place because it lies entirely south of equator. Today the full official name of Australia is Commonwealth of Australia.

Australia is the home of three unique animals: platypus-mammal that lays eggs, the kangaroo-which carries its young in a pouch, and the emu-a large bird that does not fly.

Australia’s Great Barrier Reef is the world’s largest coral reef. It is made up of coral deposits & is about 2000 kilo metres long

Australia is also known for its various type of Eucalyptus trees. There are over 500 varieties. 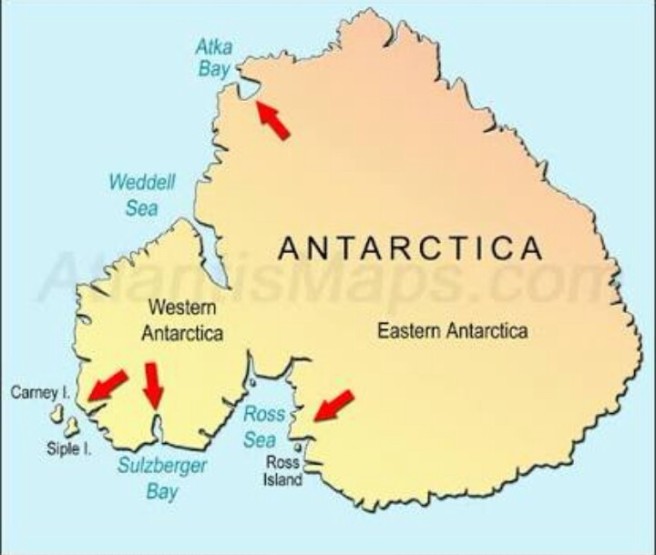 Do you know before 1840, the Antarctic was called as Terra Australis Incognita (meaning the unknown southern land)?

Do you know the area of Antarctica continent keeps changing as per seasons! It is approximately 14.2 million square kilometers in summer, but during winter it almost doubles because of large amount of sea ice that forms along its periphery.

Antarctica is a frozen land area around the South Pole. It is also called“Frozen Continent”. Antarctica is the highest, driest, windiest, emptiest, coldest place on earth.

Antarctica contains 75% of the ice in the world. It is estimated that ice is 4 km thick. It looks all white, that is why it is also known as “White Continent”. Antarctica also contains about 70% of the world’s fresh water.

Antarctica is the windiest continent on earth.

The water of the Antarctica is so cold that nothing can rot here.

The coldest natural temperature ever recorded in the world was in Antarctica. It was as low as –89.2°C (–129°F).

Antarctica has no cities, villages or farms. The only permanent settlements are research bases, where scientist from different countries come and reside & do different types of research.

Most of the continent is dry. Few interior parts receive an average of 5 cm of rain on annual basis. In a way, the Antarctica is a cold desert.

You would be surprised to know that in Antarctica, time stands still – there are no time zones!

During the winter period in South Pole (late March to late September) it is dark all the time, means it is always night!

In the summer-time, it is light 24 hours a day!

Another interesting fact about this continent is that there are miles & miles of lakes under its ice. These lakes have been untouched for millions of years and carry many secrets about our planet formation, scientists are trying to uncover few of these secrets.

The land animals are almost negligible on this continent. The largest land animal in Antarctica is an insect, a wingless midge, known as Belgica Antarctica. It is less than 1.3 cm long.

Penguins are most often associated with Antarctica. Adelie penguins are the most common kind of penguins found here. These are birds but cannot fly. 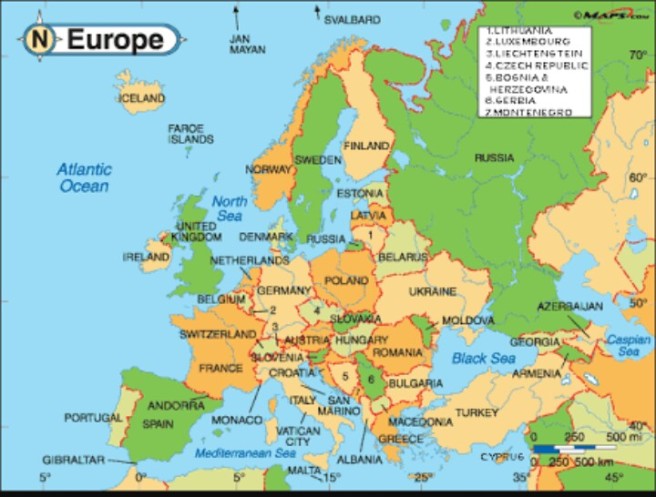 It is believed that Europe is named originally after ‘Europa’ who was a Phoenician Princess from Greek Mythology..

In Europe, there are no deserts. It is the only continent without any deserts.

Both world wars were largely focused in Europe.

Golf started in Scotland and Cricket was first played in Britain.

The Vatican City, the world’s smallest country is in Europe.

Most of the countries of Europe use a single currency called the Euro.

Industrial revolution is said to have originated in Europe only & from here did it spread to whole world.

One of the unusual festival of Europe is the Tomatina Festival. It is celebrated in Spain. In this, every participant is involved in throwing tomatoes at each other. 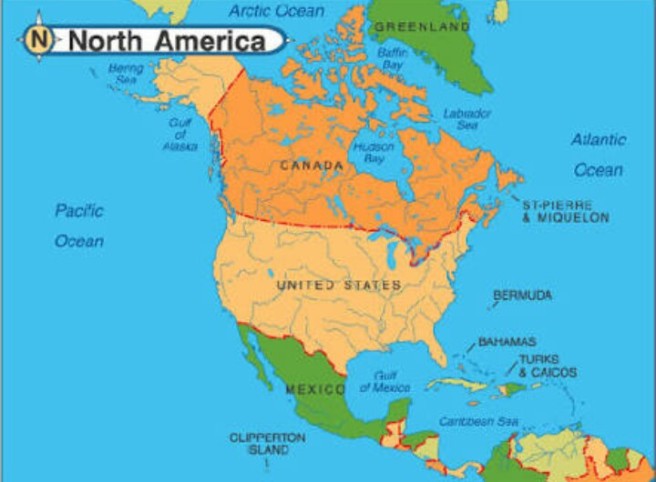 North America was named after the explorer Americo Vespucci.

The population density is approximately 22.9 per square kilometer, which is the largest for any continent in the world.

North America is around twice the size of Europe.

Lake Superior in North America is the largest fresh water lake in the world. It is located on the border between the United States and Canada.

It is also known as “New World”.

North America is the third-largest continent area, following Asia and Africa, and the fourth in population after Asia, Africa, and Europe.

The Mississippi, the third longest river in the world is in North America. Its length is 3778 km. In the Native American language, Mississippi means ‘Great River’.

The Elf, the world’s smallest owl in the world in also found in North America

North America is the world’s largest producer of maize, wheat & soybean. More than half of world’s maize is produced here whereas it is the largest exporter of wheat.

Cuba, a country in North America, is known as the ‘sugar bowl of the world’. It is the world’s largest exporter of sugar.

USA, the world’s largest economy & most powerful nation is also in North America. 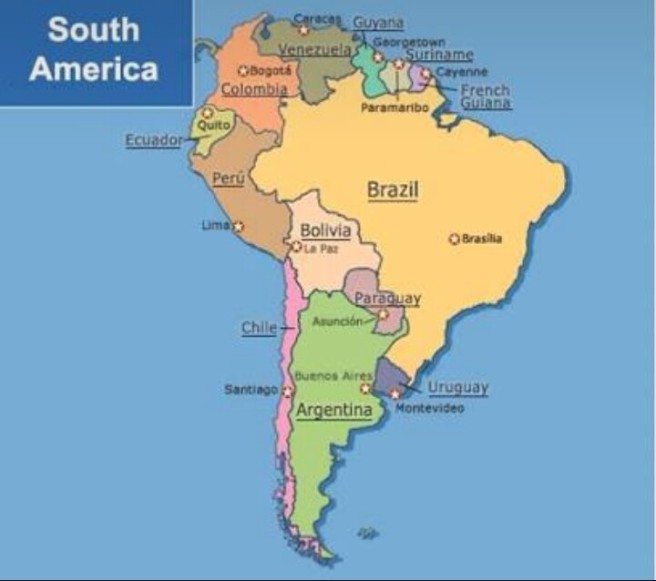 Andes in South America, form the Second Highest Mountain System in the World next to the Himalayas(in Asia). They are Young Fold Mountains. Mt. Aconcagua is the Highest Peak (7,021 m) of The Andes.

The Angel Falls of South America is the Highest Waterfall in the World.

It also has the world’s largest river –Amazon (by volume of water). The name Amazon comes from Native American name for the river ‘Amazunu’ meaning ‘big wave’. In length, it is the second longest river in the world (6440 km)

South America is also the home of anaconda, one of the world’s largest snakes.

Mt. Chimborazo and Mt.Cotopaxi, the world’s highest volcanoes are found in South America.

Major languages spoken in South America are Spanish and Portuguese.

It also has the largest Salt Lake of the world: Salar de Uyuni (Uyuni salt flats).

Brazil, a country in South America, is the largest producer of coffee in the world.

Soccer is the dominant game in this continent.

I need inspiration on…